Yesterday my wife and I visited the Portland Art Museum. One of the exhibits is a patron- 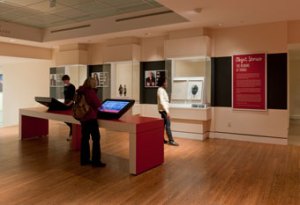 participation collection called Object Stories. Laura told me that we could bring an object and contribute to the collection, so I brought an item I have had for many years, and told its story. To document the object story, I sat in a booth and spoke while an audio recording was made. Then some photos were snapped of me and my object. In about a week my story will join the many others already recorded and on display there and online. (Update: my Object Story is now here.)

I brought a bottle half-filled with sand. Here is the story.

Sometime in 1976 or 1977, my grandmother, whom we always called Nana, had a collection of antique glass bottles.  I don’t think she had collected them; they came to her, if I remember correctly , together and uncleaned. She let me have one that she knew I was interested in. It was made of clear glass, about four inches high. It had been a bottle of battery oil – Thomas Edison Battery Oil.

Edison was a childhood hero, a man whose genius, creativity, scientific mind and brilliant inventions inspired me and made me want to grow up to be an inventor. At least, when I was eight. His signature was formed in relief vertically on the bottle: Thomas A. Edison.

A year or two later I moved away. In the summer of 1978, I moved to Montana, and later in the summer came back to Oregon, where my family spent a week at the coast. I brought the bottle. About to turn 15, I knew I was closing the chapter of my childhood in Oregon, and wanted to bring a piece of it with me to my new home. So I went down to the beach one day, scooped up some sand, put it in the bottle and stopped it with a wine cork. I took it back to Montana with me, and except for a short period here or there, I’ve had it with me ever since. For 34 years.

I chose the coastal sand over some Portland clay because the ocean beach was special to me, especially Cannon Beach and Haystack Rock where I often went as a boy. So I didn’t need a moment’s thought when choosing the object for my story. This little bottle with its fourfold precious meanings – a gift from Nana, the name of a childhood hero, a piece of home and a remembrance of boyhood summer days at the ocean – came instantly to mind.