Last post I talked about visiting Steve Albini a few months after he had produced Lungs, and how the do-it-yourself project influenced my thinking about media access and, in a broader sense, making your own way by making it your own.

That really started back in high school, when Steve put together his first band, Just Ducky. I don’t have a lot of details about the band, and my chronology is pretty fuzzy. What I do have is a few memories, and some artifacts. They might be the only ones still in existence, and I have the pleasure of sharing them with you here. It includes a steno pad of Steve’s that I used after he did, and then kept all these years. In August I showed it to him, offered to give it back, and asked if I could keep it and use it for these posts. He said, Sure. Again, thanks, Steve.

As I said before, I read that Steve taught himself electric bass while laid up with his broken pretzel. I believe that was in the fall of 1979, because he has the cast on in the Lance staff yearbook photo, and I believe that was taken in the fall. My recollection of going to parties through the winter, that were played by Just Ducky, indicates the band was put together in the late fall or early1980. The line-up I remember is: Steve on bass and vocals, Jon Rose on guitar, Heather Gonsior on keyboards. If the Wikipedia article is to be believed, the drummer was Joey Cregg, whose name is familiar, but whom I don’t remember. However, in his notebook, Steve noted on one of his songs (Sounds Like This) parts for “Randy, Dave, Me, Heather.” I have a guess who Dave is, but I don’t for Randy. I wonder if this is the original line-up, and it changed. (Perhaps someone reading this remembers.) Another note seems to list outstanding debts of band members for expenses: “Dave, Steve, Heather, Jon, Randy.”

They were a garage band, but they were the first band I knew, and I got a huge kick out of them. Hearing them play – at parties, at local clubs or just rehearsing – coincided with my first exposure to punk and New Wave music, and with having joined a new circle of friends. In fact, the songs I remember were their covers, and some of them I heard for the first time performed by Just Ducky, not the original artist: Blitzkrieg Bop, Psycho Killer, etc. They played with lots of energy and a really big beat. For the most part, they chose infectious and accessible songs. They also put a punk twist on some classics. They made me want to dance, however embarrassingly. 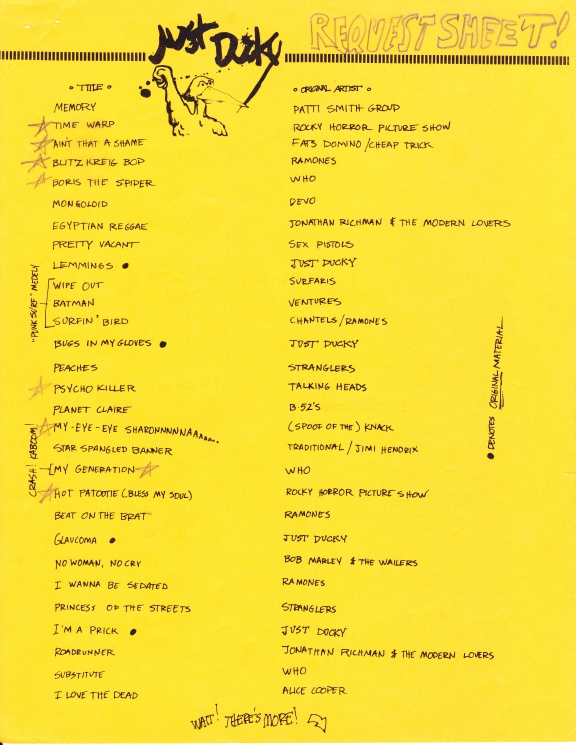 My copy of the band’s song list. I put a star next to my favorites.

I remember them playing a party in the apartment of Steve’s sister Mona, when the band took up half the living room. I remember going to a club (Yes, I was 16, but what can I say? They were lax.) and sitting in the front. They were poorly received and someone lobbed an ashtray at Steve. (Who else? Not Jon or Heather – they were so nice! Just playing their instruments for world peace. But not Steve.). I was worried that Steve might get hurt. To my alarm, he was not worried: he urged the crowd to throw more things at him. I suppose he was also not worried about playing that venue again.

I also remember the end-of-the-world party. Well, I remember we had one. I don’t  specifically recall the event. In the spring there was a small cult in Missoula that predicted the world would end in a nuclear holocaust at 5:55 pm on April 29th, 1980,  so Steve decided we should throw a party that day and call it the Doomsday Party. Musical Apocalypse provided by Just Ducky.

Steve made this flyer.

The band was short-lived. If it began in the fall, it was over no later than the summer. They lasted maybe eight or nine months. Even so, I think it was important to Steve, and he took it seriously. His notebook has some calculations about the purchase of gear and how much it was

going to cost, that show he’d done done his homework and thought through their options. I don’t know why he started a band, knowing that it would cease in less than a year. My guess is that everything Steve did was to teach himself how things worked out. The only way to know, to really learn, is to do it yourself. Other people’s experience can be helpful, but it tends to offer lessons rather than the personal skills and know-how you must have. Eventually, you have to move beyond dreaming and planning to actually doing it.

“Glaucoma” by Steve Albini. The thought of someone publishing some of the stuff I wrote when I was 17 mortifies me. That’s why I got Steve’s blanket verbal permission after he looked at the notebook. Even so, I have no desire to embarrass him (Is that possible?), and in my amateur opinion there is nothing embarrassing about these songs. If you were writing rock ‘n’ roll songs when you were 17, then you can criticize, I suppose.

I should say something about Steve’s original songs. I have absolutely no recollection of them. I know they played a song called Glaucoma, and I marked another, Electric Guitar, as a favorite on their song list, but I can’t remember any of them. Glaucoma and Sounds Like This are the two songs preserved in the notebook. To my knowledge, they never recorded anything. It wasn’t that kind of band. For Steve, I think it had mostly to do with learning how and having some fun.

Even though some people hated every note they played, a lot of us – mostly friends of the band, and people who knew each other – got a big kick out of them and appreciated Steve’s homegrown punk persona. I never got to see the Ramones live, but Just Ducky, with the 17-year-old pretzel Steve Albini, barking out some of our favorite punk and new wave tunes, was a pretty good stand-in.