This was most of my work on the project. I had to schedule my work around the construction of the house. I couldn’t begin until the electrical wiring for the house was done. That is because in running low-voltage and speaker wire, I needed to avoid long runs that were too close and parallel to the AC wires. That means I had keep my runs far enough away or cross the AC perpendicularly so that I would not have a problem with RF interference.

Here is an excellent primer at Crutchfield on in-wall speaker wiring. I referred to it again and again. This will show you how I routed my wires, drilled through studs, tacked the wires to the studs, and the tools I needed. The guide for existing construction is here. 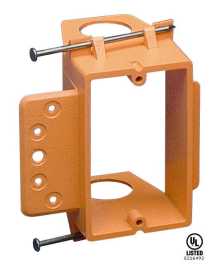 Low-voltage box from the Home Depot

Install boxes for audio wall plates, an AC outlet for the PJ, low voltage outlets and the HDMI cable pass-through. Some of the wall plates required double- or triple-gang boxes, and for those I used plastic AC boxes. Near the projector location I put the HDMI cable pass-through and a 2-gang AC box. I got a special AC outlet since my most expensive piece of equipment was going to be attached to it.

Run in-wall HDMI from PJ location, and speaker wire from speaker locations, to AV receiver (AVR) location. I centered the screen between the door and the wall. The AVR and other components would be on a stand or shelf on the floor beneath the screen and to the right of center. So I planned a group of wall jacks and plates on the wall behind where all the equipment would sit: 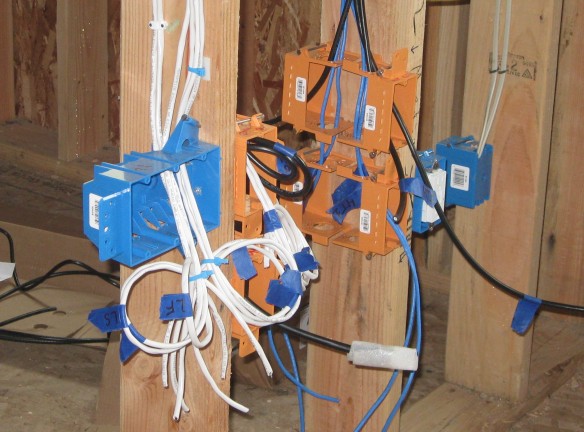 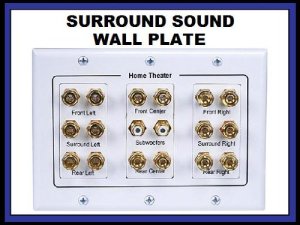 1. 7.1 speaker banana plug wall plate
2. Two data (Cat5) and two coax outlets ( I also ran the low-voltage wiring myself.)
3. Single-gang AC outlet
4. Speaker jack for zone 2 (office) speakers
5. A stereo audio connection to our downstairs PC, which has all our music on it. This is so we can play music on the PC and hear it upstairs if we want.
6. A pass-through (not a jack) for the HDMI cable from the PJ. The cable comes out of the wall and plugs directly into the AVR.

On-Q pass-through. I got mine at Lowe's.

I also made pretty careful determinations about where the speakers should go. Once the walls were closed, and the speakers mounted, they really were not going to be easily moved. I used this guide for 7.1 speaker placement. The center speaker (the most important) is located in the exact center, directly under the screen. I did not put this wire in the wall beacause the speaker is only a couple of feet from the AVR. Even though the room was only framed, I conceived a line marking the center from the floor, up the wall, across the ceiling and back down the back wall. The screen was centered on this mark, and I placed the center speaker and the PJ mount in this line. The speakers were placed by measuring from this line (except one; but I will get to that). I ran the HDMI cable and the speaker wires up the walls, above the ceiling and back down the walls. There was less drilling through studs that way. 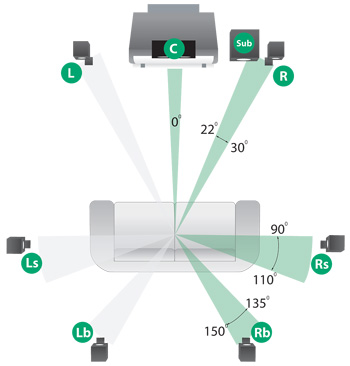 The front speakers are immediately to the left and right of the screen, at ear-level. The side surround speakers were placed just behind where I estimated the seating area to be: about the same distance from the screen as the PJ (12.5′) or a little closer. The sides and the rear speakers are above ear-level, at about 60″ above the floor. The rear speakers are just about opposite the front speakers. Since the rears sit on bookshelves, their position is somewhat adjustable.

I had to make one concession to the size and shape of the room. The left side speaker is not equidistant with the right from the seating area. Because there are doors at the NW and SW corners of the room, and double doors on the west wall, the seating area needs to be to the right of the walk-through. But this will not be a problem once to the sound is calibrated on the AVR. It will compensate for the slightly greater distance of the speaker.

Lastly, since I was not sure where it would need to go, I did not put the cable for the sub-woofer in the wall. It is a long loose cable running on the floor along the east wall.

Here is the diagram I made for the room: 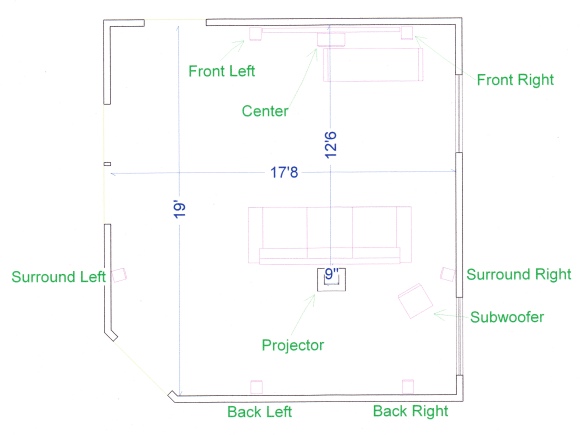 Fix metal boxes for the wall-mounted (front and side) speakers. I used metal outlet boxes instead of

plastic because of the extra weight the speakers would put on the mounts that would be attached to the boxes.

Attach the PJ mount to a ceiling joist. I found what seems like the best deal to be found for a ceiling mount. By far the most expensive route is getting the PJ manufacturer’s mount for your specific model. Next is the big name universal mounts like Chief or Peerless. But I found a very inexpensive alternative at MountDirect.com. I am very happy with it. I got the NPL Series Projector Mount ($44.95) with an 8-inch extension pipe ($10.95), and fortunately it fits the Epson PJ I 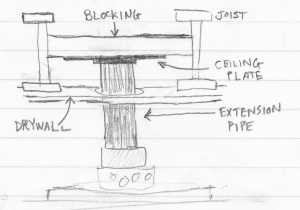 ended up getting instead of the Panasonic that I thought I was getting when I ordered this mount! At this stage I put a piece of blocking between two ceiling joists and attached the ceiling plate with the extension pipe to the blocking. I covered the lower part of thepipe with paper and tape to protect it during the drywall and painting phases. I did the same with the ends of my HDMI cable.

Blocking for the center speaker wall mount. I didn’t want to attach heavy items to the drywall when I had the option anchoring them to the framing, and with open walls, I always had that option. I put two pieces of blocking etween the studs for the center speaker brackets. I took pictures and measurements so I would know exactly where they were when it was time to install the brackets. 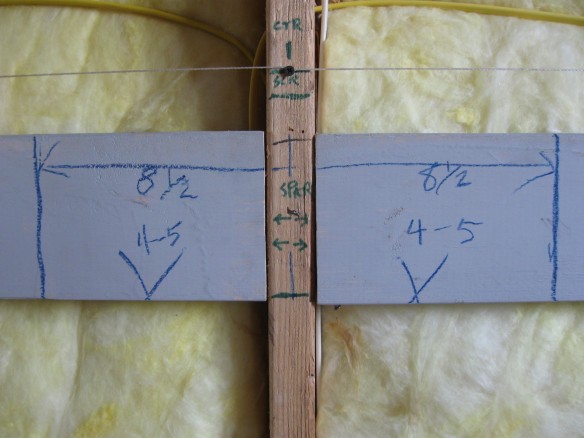 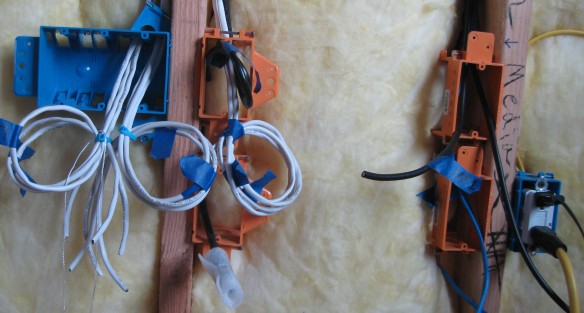 All of this is done after electrical and before insulation and drywall. Once the walls are closed, the next phase of the project comes after the floors, trim and interior painting are finished: installing fixtures, mounts, brackets and wall plates. That will be described in Part Four.