I figured on the following rough breakdown:

As I got further into planning and choosing specific products, the breakdown became more detailed, accurate and large. My most important and expensive decision would be the PJ. For my research I relied heavily on the excellent site, projectorcentral.com. I wanted a HD 1080p PJ, with an excellent picture, that was reliable, quiet, easy to use and something I could count on lasting for a long time. 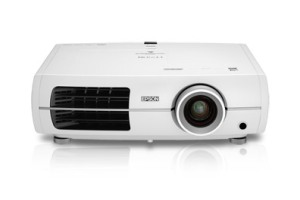 I more or less built my plan around the PJ. Its specs determined its placement (the lens at 12.5 feet from the wall). Since it had HDMI inputs, and AV receivers began to feature HDMI as a standard output, I changed my original plan to run every conceivable kind of cable (composite, s-video, component) to the PJ, and decided to just run one HDMI cable from receiver to PJ. All the sources into the receiver, just one video cable out.

As I began to research the next most important item, the AV receiver, I realized the weak-link principle applied to home theater components. If you start with a high-def source, a Blu-ray disc for instance, and it ends up in a high-def PJ, you can’t send the video through a receiver that passes anything but the best signal, or you will lose some of that quality you are paying for on either end!

I began looking into one of Onkyo’s new line of receivers and became rather set on having the best video processor I could afford. In this case it was the Silicon Optix Reon-VX video processor featured in the TX-SR875 and TX-NR905. If I was going to get an Onkyo receiver, I figured that a set of speakers from Onkyo would make sense.

In hindsight, getting fixed on that video processor was proabably at the root of the Receiver Debacle, the only part of the whole project that turned out badly. The more expensive AVRs from Onkyo have the Reon chipset. That along with the reviews that praised its upscaling performance, convinced me I had to have a model with the Reon. The less expensive models have the Faroujda processor. If I had settled for that, I would have bought a new AVR, and I would not have made the mistake of buying the 875 used. I found one from an online vendor at a price that was too good to be true. (Note: “Too good to be true” = “Not true.”) Only after my purchase did I realize that Onkyo would not honor their warranty if the product was purchased from an unauthorized dealer. The receiver came, having no serial number and a right front channel that did not work. I sent it back to the vendor ($70) who said he would have it repaired at the nearby Onkyo service center. He returned it to me, but it was not repaired. I returned it again, at the vendor’s expense, and after 5 weeks am still awaiting its arrival. Learn from my mistake: buy only from authorized dealers, with manufacturers’ US warranties. I already knew this, but I’m always out for a good deal.

After those two decisions I spent most of my time thinking about the best ways to wire the room and connect everything. I was going for simplicity (as few cable runs as I could manage) and avoiding future replacements or upgrades in the walls. Since we were building our house, I was going to have all the time I needed with the open walls to to run the in-wall wiring. I calculated the wire runs so I would know how much to order.

The best prices generally that I found for wire, cables, connectors and wall plates was an online vendor called monoprice.com. I bought the subwoofer cable, 35′ HDMI cable, banana plugs, in-wall speaker wireand 7.1 wall plate there. Excellent prices. In the Portland area there is a local outfit that has every type of cable imaginable at very good prices: PCH Cables.

Another important item that required some research was the TV tuner.

Again, I wanted my system to be simple and that meant not having to unplug, plug or reroute cables in order switch between sources. I wanted everything to have their own switches. I wanted all my video and audio sources to go into the AVR, with its one HDMI out to the PJ. The problem is this: when you have a PJ instead of  a TV, you have no way of watching over-the-air (OTA) or cable chanels without getting some kind of tuner. There are a number of ways to do this. But to cut to the chase, I found a great product that did exactly what I needed without setting up a computer, renting from Comcast, or having multiple boxes. The PHD-205LE  is a HDTV tuner that tunes all local OTR DTV channels and cable channels up through 32 in one unit. Plus it sends HD and surround sound out over HDMI to the AVR. Very nice, and only $136 from epvision.com.

As for the screen, I had settled on painting it on the wall. At first I thought I would have the drywall crew leave the wall, or a section of it, untextured. Then I would apply a specially formulated paint product called Goo Screen, which would run me about $175. The drywall lead suggested they texture and prime the wall and after painting, that we hang a piece of sheetrock on the wall. So that’s what we did. By that time I had found extensive research on the AVS Forum indicating that I could mix my own sreen paint with off-the-shelf products from the Home Depot. It only cost me about $50. I’ll tell you all about that in Part Four, along with the other elements I  didn’t discuss on this page.

Below is the best reckoning I can manage for what I actually spent on the whole project. I spent a lot on the low-voltage wiring and many items were purchased together with home theatre items, so I can’t separate out the expenses. This is not exhaustive, but it’s pretty close.