From my journal:
Breakfast @ hostel. Walked the Old City. Fabulous market. Laura bought lavender seeds as gifts. I bought a bar of soap.

We decided to try again to ride a bus along the Moyenne (middle) Corniche. Waited about an hour (12:30-1:30) in Place Garibaldi, but it never came. So we took one to Villefranche instead. Sunned ourselves and got in the water. Very nice. 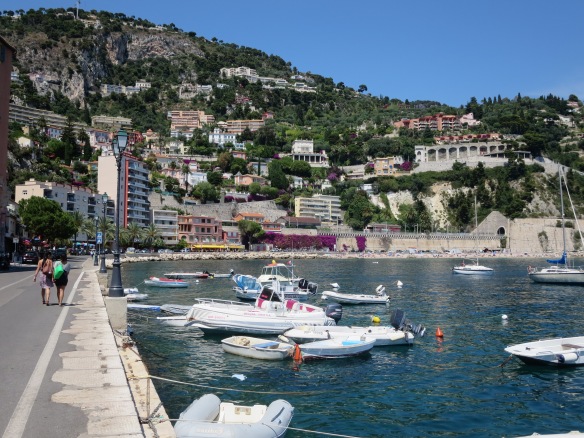 Villefranche on the French Riviera.

We had bought some food to cook before we went and left it at the hostel. When we got back we fixed ourselves dinner in the kitchen. Then, went for a walk again.

The hostel lies between the train station and the Old City. We went to Place Massena. They were having a series of evening concerts with three bands per night, called “Crazy Week.” We listened to a hard-rocking group with catchy guitar riffs called “Nothing.”

Got dessert nearby: lemon & sugar crepe, and pistachio/hazelnut milkshake. The second band was up, singing a song about vampires. As they say, write about what you know.

Back at the hostel, we turned in early, about 9:30, as we have an early train. Went to sleep about 10:15, and had wild dreams about getting lost amid steep streets and railroads that were crumbling.