Back in January of 2007, almost two years before I did it, I was planning to start a blog. I wrote a few things, and one of them I thought I would make my first post was entitled, “Thank Steve Albini for This Blog,” a stupid title on multiple levels. What I wrote there was a few things for which I was grateful to Steve having taught me by word and deed.

I went to high school with Steve, and he was the most interesting and certainly one of the most talented people to walk the halls of Hellgate High School. In fact, Steve is one of the mo

st interesting people I’ve ever known, and that would be true even if he’d been washing windows for the last thirty years. I saw him on a visit to Chicago in 1983, and I did not see or talk to him again until a friend reunion in August of this year.

At one point, at our Friday night party, I told Steve about the unpublished article I wrote. “Since I knew I was going to see you, I decided I would just tell what it said, by way of thanks.”

“That’s what I’m going to tell you.” I explained to him that there were four things I had learned, mostly by his example, that they had stayed with me, and he was the person I had to thank for them.

(In the article there were actually five, but the fifth was more or less an excuse to tell the John Lennon Story, which will have to come later, and it was not something I was thankful for.)

I was glad to be telling this to Steve. Many people help us to grow and change in various ways, and being able to thank someone for it, even when they seem like small things, I think is worthwhile. For his part, Steve Aged 50  was a little surprised I had some nice things to say about Steve Aged 17. Why is that? Well, remember that bit about Steve being the most interesting person, the most talented person? He was also the most hated person.

This was not an accident. In my freshman year, before I met him, I avidly read his columns in the Lance. He wrote music reviews and other articles, but my favorite was his humor column. He also did cartoons and illustrations. He did it a lot. In fact, he made me want to write for the paper. For that, I would have to take Journalism 1 my sophomore year, then I could be on staff my junior and senior years. In his writing Steve was funny, outrageous, and knew how to antagonize people. He also talked about stuff that was not mainstream in Missoula, Montana in 1978. Like punk rock.

Steve could make people mad, and did make people mad, but why did he make people mad? I couldn’t say it was his aim to do it. It was probably closer to the truth that he aimed to say what he pleased, and if that angered his readers, tough. And when it came to saying what he pleased, he was like no other person I had met. Wicked smart and verbally well-armed, he could perforate people or things he didn’t like with his words. But of course, that is one of the few defenses available to scrawny kids who act and draw and write and make music in a setting dominated by conformity to a teenstream culture that didn’t always value someone like Steve.

#1: Maybe you should try something new for a change.

be themselves as a teenager who does not and will not fit in. Pushing back on the pressures we were under to not be ourselves – or at least insisting on being able to explore the possibilities –  took some resolve, and sometimes there was anger or resentment lying beneath the surface. That may have been some of the appeal of punk rock: the ragged edge of anger over the pressure that bore down on young people: you can’t do this, you must do that, and stop complaining because there’s nothing you can do about it. Instead of the Boomers’ demand for a better world, many had the Gen-X resentment at the empty promise of one. Might as well blow off a little steam about it.

Another angle is looking around, like many teenagers, and finding plenty to be disgusted, dismayed and angry at. There was some of that for me. Maybe for Steve, too. I think it’s in his songs.

Of course nothing like this occurred to me at the time. On the contrary, I had been sleep-walking most of my life. And I was much more of a boomer in my general outlook – more hippie than punk – so I found Steve’s recommendation of punk rock hard to grasp. After I met him in the fall of 1979, I would rib him about it, as if he should be embarrassed to embrace and promote music – and the attitude that went with it – that was so far out of the mainstream, that people (like me) were so unlikely to accept.

Steve was annoyed but put up with my pestering. On the one hand, he managed to make me feel like a dork for having such narrow taste in music: I had grown up listening to the Beatles, Elton John and whoever else was played on MOR radio, and didn’t know about much else. I had read about punk rock, but I had never heard it – until I met Steve and the other friends I made on the Lance.

On the other hand, Steve did not just make me feel stupid, he made suggestions to me about music he thought I should listen to. My response was skeptical and dismissive at first. That changed after I had ignored his positive review of Tom Petty’s Damn the Torpedoes, and subsequently heard it. After that, I realized I should reconsider blowing off Steve’s musical opinions. The fact that he put down music I liked (On CSN&Y: “They’re fat and old,” which I later realized he probably got from a line in Remote Control by The Clash.), didn’t mean he couldn’t point me to something great, which is exactly what Torpedoes was: freakin’ great. 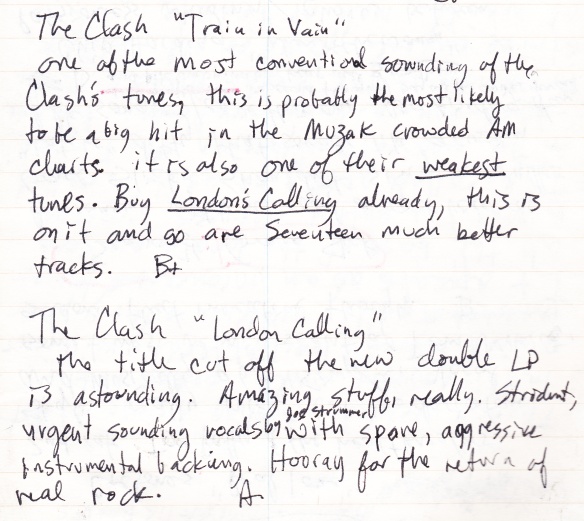 In December or January, Steve included in his song reviews two songs from The Clash’s London Calling. Around the Lance office he was talking up the album. I was skeptical until I heard the title track on a surprisingly eclectic AOR station. I remember today the very time and place that song came booming and screeching through the speakers in our living room.

The Clash interrupted my regular programming with a report of nuclear apocalypse, of the world ending with a whimper – a variation on the scenario that had visited me in nightmares since I was ten.

It blew my mind. Then I heard it again. Then Troy Deckert, the editor of the Lance, got the album, and I heard the whole thing. That changed everything. After that, I wanted to hear new things, and what a time for hearing new things that was! The Ramones, Elvis Costello, Warren Zevon, The Pretenders, The Talking Heads, The Police – all putting out music that spun my head. Much of the real excitement I felt at this time in my life was the discovery of new and old music  that I never would have heard if it wasn’t for Steve, and later my other friends (Troy, Jeff Morgan, Matt Crowley, Mark Hayes), who stuck it in front of me.

How the combination of new friends, new music and drugs altered my path is more than I’ll go into here, and it wasn’t all helpful, but having my mind and ears and eyes opened to a wider world of music and ideas was a gift. It was Steve who first put his shoulder to the door and gave a good shove.

Next: Motorcycles and Music.

"Free range of any kind means the animal leads a life closer to its natural environment doing what it does best." -Answers.com

If you are a copyright owner of any unattributed image or text on this blog, send me an e-mail and I will remove it or give you credit, whichever you prefer.
Loading Comments...